This is the unofficial, unauthorized, untold story of the biggest feud going on in HollyWooz! And you'll never guess who it's between... Famous frenemies, Camilla Cooper and Zoey Zellers! We've investigated the drama as it's unfolded and, trust us, we have some piping hot T ready for your consumption.

The feud goes way back to when Camilla and Zoey landed roles for their first show on XYZ Family; Wizards of HollyWooz Place. It was each their first lead role on a TV show and they quickly became the best of friends. This is also where they met Derick Dunn, who has been the center of their feud. 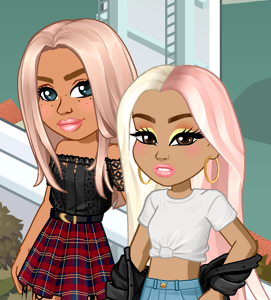 The show blew up overnight and brought huge success to the three stars. The writers, knowing this, added a love story between Zoey and Derick so fans could set sail on this ship. Unfortunately for Zoey, it seems she had a hard timing keeping her onset feelings separate from those off-set. Zoey turned to her BFF, confiding in Camilla that she had feelings for Derick. Taking Camila's advice, Zoey decided to disregard her feeling for her co-star and keep their relationship 100% profesh.

A few weeks later, Camilla and Derick were talking backstage when Derick suddenly kissed her. Zoey, of course, saw everything. Sources onset say that time seemed to stop; it was clear that Zoey was upset. The hurt, the pain, was written all over her face as she ran to her dressing room and slammed the door. Camilla, shocked by Derick's advances, pushed him away and ran to her BFF, knowing that witnessing such a betrayal was sure to hurt her. Camilla waited outside Zoey's dressing room for what seemed an eternity, but her knocks and pleas went unanswered.

Understandably, Camilla and Zoey's friendship wasn't quite the same after this. They were no longer close, no longer hanging out after long days onset, no longer posting their usual #friyay selfies at the end of each week. It became nothing more than a professional, if not cordial, relationship. That is, until Camilla and Derick went public with their relationship.

The very next day, Zoey announced she would be leaving "Wizards of HollyWooz Place."

Zoey's departure obviously struck a nerve with Camilla. She did her best to explain what happened between her and Derick, but Zoey refused to listen. When asked in interviews about her old friend, Camilla would always give her well wishes and seem to have a genuine fondness for her.

Zoey, on the other hand, would be cold, often unapologetically switching the subject. It became well-known in HollyWooz circles that asking Zoey anything about her time on her break-out show was a no-no. The two were also often kept away from one another at events.

As time went on, Camilla became sick of being painted as a man-stealing villain and soon began to speak more candidly about the situation in interviews. "I never 'stole' Derick from anyone," she said in an interview with Z! News, "You can't steal something from someone if they never had it in the first place." Being careful not to name-drop, Camilla went on to say, "Derick was there for me when my best friend cut me out of her life... Our feelings developed very organically and it's sad that certain people can't be happy for us." The couple (dubbed Dermilla), who had previously been notoriously private, slowly became more public, posting cute selfies on social media and being photographed walking hand-in-hand, always sipping the latest Yetibux drinks.

Zoey, who had remained quiet about the relationship for months didn't like the way her former friend seemed to be down-playing her role in their feud. Her WoozIn was soon filled with low-key disses seemingly directed at the happy couple:

Camilla soon took to the defence, though. She was no longer holding back when it came to Zoey. On her own WoozIn:

With the feud escalating, fans were quick to choose sides between the two starlets. There were those who sided with Zoey, thinking that what Camilla did was dishonest and low, and there were those who sided with Camilla, believing that Zoey threw her best friend away over a simple crush. Fans were less quick to judge Derick, though. He was able to maintain his reputation with his (mostly female) fan-base as a guy who simply got caught in the middle.

That all changed, however, when Camilla and Derick parted way. The news first broke just after the former couple was caught by WMZ cameras having a very public spat outside the HollyWooz Cafe, one of the couple's favorite hangouts. "All I want is for you to post more selfies with me! Everyone already knows about your abs and your dog," Camilla was heard saying, "People are going to start thinking that you don't care about this relationship." Derick reportedly laughed this accusation off, saying, "If you care more about what people think than you do about my abs or my dog, this might be a bigger issue than selfies!"

Within days of their public feud (#dermillaisdone), the two had unfollowed one another on all social media platforms and deleted every Dermilla selfie they'd ever posted.

During the aftermath of her break-up, Camilla asked for space. She posted on her WoozIn:

She was seen doing some retail therapy with fellow actress, Betty Blonde, and on her usual morning runs. Her social media remained uncharacteristically quiet. 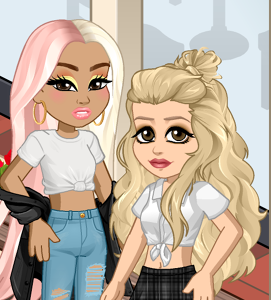 Derick continued to post pictures of his abs and his dog as usual, but was not seen at normal hangouts, such as the HollyWooz Beach and Yetibux. He spent time away from HollyWooz, instead spending time in nature to regain some focus. His WoozIn posts seemed to center around this:

Meanwhile, Zoey had just one WoozIn post after the break-up: 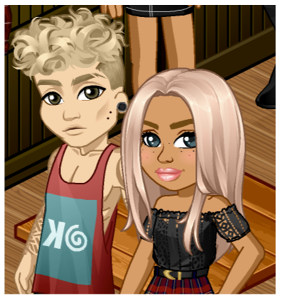 With Dermilla officially done, fans were quick to speculate whether or not Zoey and Camilla would mend their relationship. These speculations quickly came to a halt when Zoey posted a selfie to her Wooztagram story. It wasn't just any selfie, though... It was a selfie of her and Derick enjoying a show at the HollyWooz Cafe, captioned "Always nice catching up with old friends xox". Fans immediately flooded their respective social media and soon #Zoerick was trending.

Zoey's fans rejoiced, saying that Zoey had finally won, while Camilla's fans thought the selfie was a tacky move on Zoey's part. Derick's fans, for the first time, became divided. He no longer seemed to be the "nice guy caught in the middle;" he was now seen as a playboy, jumping from girl to girl and ruining friendships along the way. Before he could respond to the public shaming, #dirtyderick was a trending topic.

Though both Zoey and Derick claim that their relationship is nothing but a close friendship, sources tell WMZ that the two have been spotted around HollyWooz walking arm-in-arm, sharing warm embraces and playfully teasing one another. Zoey has even been spotted accompanying Derick on walks with his beloved dog. Eagle-eyed fans have noticed Derick's likes and, especially, comments on Zoey's many selfies, such as "Wow" and "Looking good, Zo!" Zoey has also not been shy on Derick's social media, commenting on a pic of he and his dog, "What a lil cutie! You're ok too, Derick ;)"

Camilla, characteristically, has not stayed quiet on the subject, posting on her WoozIn:

With Zoey and Derick exchanging cute comments, it definitely seems like Zoerick is on... And Camilla is not happy about it. Now that you have the full story, whose team are you on; Zoey's or Camilla's?